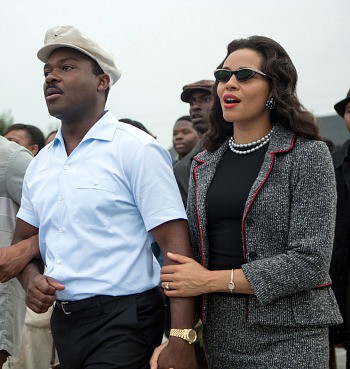 Synopsis: “Selma” chronicles the tumultuous three-month period in 1965, when Dr. Martin Luther King, Jr. led a dangerous campaign to secure equal voting rights in the face of violent opposition. The epic march from Selma to Montgomery culminated in President Johnson (Tom Wilkinson) signing the Voting Rights Act of 1965, one of the most significant victories for the civil rights movement. “Selma” tells the how the revered leader and visionary Dr. Martin Luther King Jr. (David Oyelowo) and his brothers and sisters in the movement prompted change that forever altered history.

Interwoven into the story are the triumphs and challenges Martin and his wife, Coretta, faced in their shared civil rights dream and in their own marriage – which fascinates us.

SPOILER ALERT: We’re going to dissect Martin and Coretta’s relationship, including the scene where Coretta reveals that she knows about Martin’s extra-marital affairs.

Earlier in the film, we see J. Edgar Hoover, the villainous director of the FBI, deciding to undermine Martin and the civil rights movement by creating a wedge between him and Coretta. Towards that end, an anonymous caller with a sinister voice plays them a tape of Martin purportedly having sex with another woman.

The writer reveals, with great economy, Martin’s betrayal, Coretta’s reaction and the dynamics of their relationship. After hearing the tape, Martin denies it’s him. Coretta concurs, saying she knows how he sounds – a small point that speaks volumes about their sexual intimacy. She states she’s not a fool and asks if he loves her. He answers: “yes.” Then she asks if he loves any of the others. After a short pause, he replies: “no.”

So there you have it.  A loyal wife with four kids, who we learn has sacrificed owning a home and who routinely has death threats leveled against her and their children, reveals she knows her husband has multiple lovers. Of course she’s upset and he’s shaken. Yet he doesn’t promise to stop, nor does she ask him to.  Implicit in their reactions are unspoken boundaries: he may have sex with other women, but love her alone.

It’s hard to know if this is an accurate portrayal of Coretta King’s reaction to Martin’s infidelity. Our guess is that she probably knew Martin was unfaithful prior to Selma. Did she blow up, scream, cry, threaten, or become depressed, on one occasion or many? Or did she, like in this scene, maintain a kind of hurt dignity and withdraw? Only she and Martin knew.

In couple’s counseling, however, betrayed wives are usually beyond furious, lose their trust, love, respect and desire to stay married if it happens even once. Why does Coretta stay?

We know that real women remain with unfaithful husbands because, thanks to the media, we’ve been privy to some high profile examples: Eleanor Roosevelt, Mamie Eisenhower, Jackie Kennedy, and Hilary Clinton, to name a few. What these wives have in common is that their husbands were high testosterone leaders who were battling for values they, too, believed in.

Coretta, like other women in her position, knows her man. We can see in the film that Martin has the characteristics of a high-T, totally alpha male. He is hierarchical and definitely the leader of the pack. In scene after scene we see him taking charge, of his inner circle, of the existing power structure when he gets to Selma, and of the thousands of people following him.

Like other high T-males, he is independent, single-focused, mission- and action-oriented, and willing to take risks, including with his own life. Fortunately, we see that his leadership extends to not taking foolhardy risks, as when he has the courage to turn the march back when he suspects the police are setting a trap.

Another characteristic of high testosterone is a high sex drive. In terms of his affairs, Martin, like so many famous alpha males was foolhardy. Aside from everything else, he was a minister, the FBI knew what he was doing, and yet his libido overrode his common sense. Statistically men (and women) with high-T have more affairs and broken marriages.

We don’t get a chance to see how Martin is with his kids because the film doesn’t show them. What we are shown is that his mission is his driving priority. He’s away from home a lot, and Coretta, the mother, can’t be with him much of the time.

The film doesn’t show any flirtations or affairs, but in real life, we know that many high-powered men do cheat because of their own sex drive and because women find powerful men sexy and some could care less about their wives.

Martin may not have been the best husband, but in “Selma,” we see that he and Coretta clearly love each other. They are a power couple with a mission bigger than their marriage that binds them – racial equality. Coretta is his equal, lover and best friend. She knows his doubts and flaws, but is an unending source of strength and wisdom. They are both warriors, bravely fighting in their own way and as a team to overcome centuries of evil and hatred to achieve a mutual dream. She’s there when he wins the Nobel Prize. At the end, we see the real footage of Martin and Coretta side-by-side, radiant, joyful and triumphant as they reach the steps of the State Capital building in Montgomery.

Although we can’t judge Martin and Coretta’s marriage, we do advise that men and women today seek couple’s counseling immediately to deal with issues of infidelity. There are many reasons why people cheat; adultery can be a symptom of other relationship problems. Whatever the causes, they must be addressed, individually and together, if there’s any chance of saving the relationship.

And men, if your libido is running you, don’t wait for your partner to discover it. Not only is it unlikely that any 21st Century woman is going to tolerate it, but things will get ugly. Get counseling for the self-knowledge and the self-discipline to stop.

On the positive side, what we learn from the film’s depiction of Martin and Coretta’s relationship is the power of being a team. Whether it’s supporting each other in good times and bad, raising the kids, creating a lifestyle or having a shared purpose to make a difference, being on the same side builds a lasting bond that enriches and empowers your life.

Thoughts on Martin and Coretta’s relationship? Are you partnered with a high-T person or “leader of the pack”? How does it affect your relationship? Sound off in the comments below.

Photos of the “Selma” New York Premiere by Paula Schwartz for Reel Life With Jane.